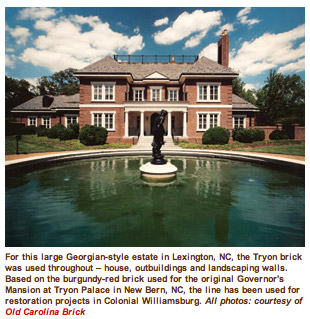 The Art of Handmade Brick

For this large Georgian-style estate in Lexington, NC, the Tryon brick was used throughout – house, outbuildings and landscaping walls. Based on the burgundy-red brick used for the original Governor's Mansion at Tryon Palace in New Bern, NC, the line has been used for restoration projects in Colonial Williamsburg. All photos: courtesy of Old Carolina Brick

The American love affair with brick has been part of our history from the beginning. The ardor may have cooled with the advent of machine-made brick, but the current enthusiasm for handmade brick has brought passion and character back to this ubiquitous building material. One firm at the forefront of the handmade-brick revival is Old Carolina Brick Company of Salisbury, NC. Founded in 1968, the firm today boasts an impressive line crafted and fired with coal after the traditions of Colonial brick makers. Twelve basic color possibilities are offered; along with the classic brick shape, the firm also provides pavers, coping, edgers, postcaps and row locks.

One can tell at a glance whether a building has handmade or machine-made brick. Art Burkhart, vice president of Old Carolina Brick, says that each hand-molded brick is unique. "Each has its own characteristics, with fingerprints and folds – like when you make a pie and the dough folds over," he says. "These little irregular marks come from throwing them by hand into a wood mold. We also use a fine granular sand in our wood molds, which not only gives it a soft, velvety texture, but also acts as a release agent when the molds are flipped over." This distinctive brick frequently shows a gentle undulation once it's been laid in courses, creating a feeling of personality and warmth, even intimacy, which is impossible with machine-made brick. "Most manufacturers have machines that will sort of rough up their brick, but it follows a pattern," says Burkhart. "With us, each is truly different." 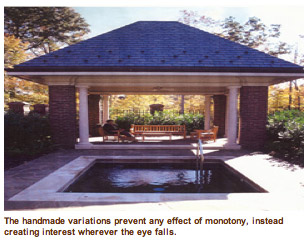 The handmade variations prevent any effect of monotony, instead creating interest wherever the eye falls.

As part of the firm's commitment to traditional techniques, the brick is made from readily available local clay. "It's regular North Carolina clay, pretty much like you find up the East Coast," says Burkhart. "We get different colors by using different types of sand. We can also change the arrangement of the bricks in the kiln cars; the spacing between the bricks produces the different hues, colors and patinas. The firing process adds to the low-key coloring. Even flashed bricks have a subtle change from one color to the next – there's nothing stark. So we don't really change anything about the firing, although sometimes we do fluctuate temperatures up and down a little bit to achieve different things. In some cases, we use some additives; for the grey tones of the Charleston and Savannah colors, we'll add manganese."

Old Carolina's methods naturally permit custom variations for clients. "So many of the jobs that we're doing right now are custom," says Burkhart. "They'll say, 'Well, I like this Savannah Grey brick that you have, but can you make it less white?' or 'Can you make this brick a little darker?' We try to accommodate the customers and tweak it for whatever they want."

The appropriate mortar tends to be a regional consideration, according to Burkhart. "In Savannah, for example, they like to use white mortar, because originally they would grind up seashells, and the mortar was almost refrigerator white," he says. "When you get to Charleston, it becomes sort of an ivory buff – more like an antique white color. Then, when you get up to Virginia, it becomes a straw color. Today, most mortars are pre-mixed and come in bags, and you have an array of colors. The Lafarge Group of Herndon, VA, makes over 200 colors of mortar. With most of our brick, people use a lighter color mortar as was used years ago, and so when our bricks are laid up, they look like they've been there 50 or 100 years."

The Savannah Grey line of handmade brick was used for the house, garage and garden pavers of this townhouse in Charleston, SC. Ships that visited Savannah would carry a grey ballast brick that soon became a popular building material throughout the city. After years of effort, the firm was able to emulate its distinctive color; the brick has become a bestseller in the region.

Not surprisingly, what was once primarily a regional business now operates for a nationwide market. "In the beginning, it was the South and the Southeast," says Burkhart. "That was our bread and butter for many years. But we have a lot of influx from the North and the Midwest; people come to the South for vacations, and they are impressed by the Low Country homes around Hilton Head and Buford, SC. Greenwich, CT, is also a hotbed for us. What has amazed us is that, only about five or six years ago, we started selling our product in California. We did a winery there, and people would visit it; and all of a sudden our brick has caught on from Los Angeles to San Francisco. Two years ago, we started a project in Brazil. We just finished a large hotel, and they're getting ready to do some more buildings there."

The aesthetic satisfaction of handmade brick has been well worth the expense for Old Carolina's clients. "Our brick is more expensive," says Burkhart, "and people who are affluent and have discriminating tastes want something a little bit different. They want something that's a cut above the ordinary, just as when they hire an architect because they want their homes to fit in with the landscape. That's a lot of our clientele, probably about 75 percent. The CEO and founder of a ladies' clothing company had searched all over the country until he finally found us, and when he flew down to Salisbury, NC, he said, 'This is the brick I want because it will give that soft patina and soft tones.' We had one person say, 'Your brick is the Rolls-Royce of the brick industry.'"

The firm's handmade brick is of course synonymous with restoration projects, with such clients as Colonial Williamsburg and Mount Vernon. But the boom in newly constructed houses built in traditional styles has been essential to the firm's growth. For a recently constructed new house in Charleston, SC, for example, Old Carolina's Savannah Grey brick was used. "It's made to look like the old ballast brick in Savannah, GA, which came over on ships," says Burkhart. "We tried for years to come up with a brick that looked like the old brick in Savannah, and once we finally succeeded, it became our best seller in the Savannah, Hilton Head and Charleston markets."

In Lexington, NC, a house was constructed using the Tryon, a burgundy-red brick that was also used for the original governor's mansion at Tryon Palace in New Bern, NC. "We had done the restoration work there, and that brick had more of a burgundy cast," says Burkhart. "We use it frequently in Williamsburg and other restorations, as well as in large homes. But we've also provided some of that up on the Hudson River in New York and in Greenwich, CT.

"For a house in New Albany, OH, which is right outside of Columbus, the owner wanted the Williamstowne brick with special accents. Our Williamstowne brick is a medium, go-to red brick for places like Williamsburg and Mount Vernon. We classify it as a tannish red. For the fill brick, they used a red brick with a little range to it; but they wanted some accent, so they chose a lighter color brick for the accents around windows, arches and doors."